In retrospect, I should have done more of an introduction, explaining that this is a topic that should be discussed. It should be made, as they say, “part of the narrative.” 🙂

Hi, everyone. I’m gonna talk about something a little bit different today. I don’t know if you remember the hearings before the congressional subcommittee investigating competition and digital markets. They took testimony from the four companies there, Alphabet, Amazon, Apple, and somebody else. I don’t remember. Was it …Facebook! Facebook, of course. Facebook. So yeah, I always wondered what happened after that. This happened after that, this.


Now the interesting thing about this is that nobody in the mass media like general, you know, public newspapers, that sort of thing reported it. They did not, even though the government issued a press release about it. Anyway, I thought I would read some of this, particularly as pertained to Amazon at this point. I mean, I could talk about Facebook too, but let’s just take this one step at a time, because it’s a lot to take in, I gotta tell you.

In Section C on Amazon under Overview, it says here “Amazon’s business strategy has generally focused on long-term growth over short-term profits. Amazon is currently one of the most valuable companies in the world.” Okay. Yeah. We know that, you know, you have to establish all these things, right. So let’s see. What’s the next one that was really interesting. Let’s see. Let’s see.

Okay. It goes on to say, let’s see something about first party sales and third party sales. Yeah. Okay. Da, da, da, da Kindle, Kindle eReaders. Yes. When a consumer visits, amazon.com Amazon’s private label, private label. Never mind. No. Who cares about that part? That’s not the good part. Okay. Wait. Not that any of this is really good. I’m sorry.

“During the course of the investigation, Amazon displayed a lack of candor to the Subcommittee in response to questions about its business practices.” According to a letter written by members of the subcommittee, a bipartisan letter I’d like to add, in May of 2020. This came out in 2020. Two years ago. “[T]he Subcommittee was troubled” I’m quoting now. “the Subcommittee was troubled that some of the ‘statements Amazon made to the Committee about the company’s business practices appear to be misleading and potentially criminally false or perjurious.’ In light of this concern, Subcommittee staff views Amazon’s other claims and representations with a degree of skepticism in instances where they conflict with credible sources–credible sources, as opposed to, oh, they didn’t say that part–such as investigative reporting, interviews with market participants, or other evidence uncovered by Subcommittee staff during the investigation.” I am reading this word-for-word from a document that is not only public, not only publicly available, but in the public domain as a government document.

Now, is that the politest way somebody could say, “Hey! Maybe these people ... they can’t be trusted?” You tell me. Thanks. Talk to you later.

Hey, if it’s in the public domain, I can adapt it. How about this?

PS: Here are my sources:

Investigation of Competition in Digital Markets, Majority Staff Report and Recommendations, Subcommittee on Antitrust, Commercial and Administrative Law of the Committee on the Judiciary, U.S. 2020.

Can anyone else see the irony? 🙂 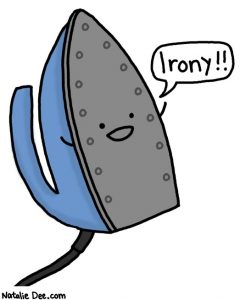 PPS: I no longer practice law, but I found inspiration here.